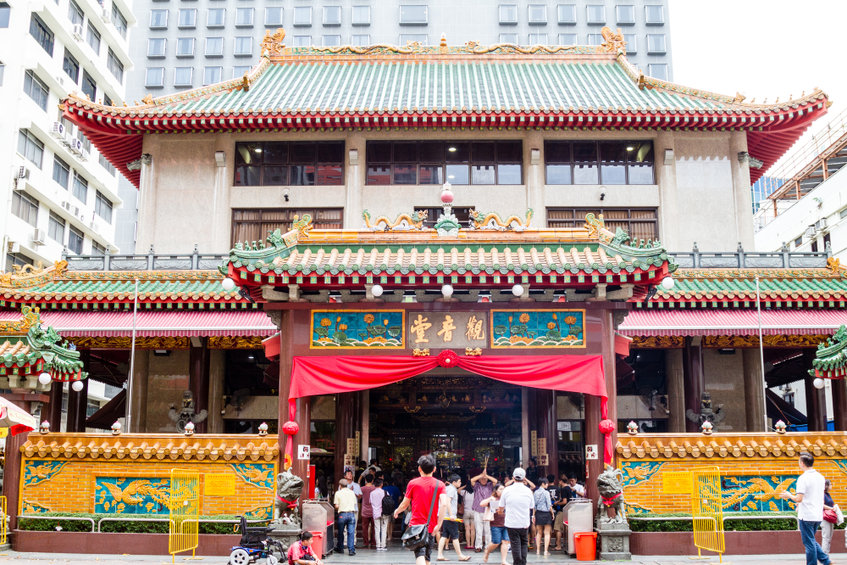 When it comes to religious worship, Singapore is a melting pot of cultures that celebrates a diverse group of faiths. In Singapore, the religions commonly practiced are Buddhism (33%), Christianity (18%), Islam (14%), Taoism (10%), and Hinduism (5%).

Given the diversity of religions, the island of Singapore offers plenty of beautiful religious buildings. We would like to take you to Im Thong Hood Cho Temple for Buddhists, Sri Krishnan Temple for Hindus, Masjid Sultan for Muslims, and St. Joseph’s Church for Christians, which are all located in the Civic & Cultural District in Downtown, Singapore.

Located on Waterloo Street, the Im Thong Hood Cho Temple is a traditional Chinese temple specifically for devotees of Guan Yin, the Chinese Goddess of Mercy and the Buddhist bodhisattva associated with compassion. This temple was built in 1884, making it one of the oldest Buddhist temples in Singapore.

In 1982, the Im Thong Hood Cho Temple was rebuilt to meet the capacity of the increasing number of worshippers that were visiting. The temple features a single altar with Guan Yin in the middle, while other deities are placed in lower positions.

Many devotees flock to the temple during festive occasions such as Chinese New Year or Vesak Day to seek blessings. On Chinese New Year Eve, the streets would be packed shoulder-to-shoulder with devotees offering their incense to Guan Yin in hopes of a promising start to the new year. Devotees can purchase joss sticks and flowers for prayer and enjoy some street performance, such as calligraphy artists displaying their talents. 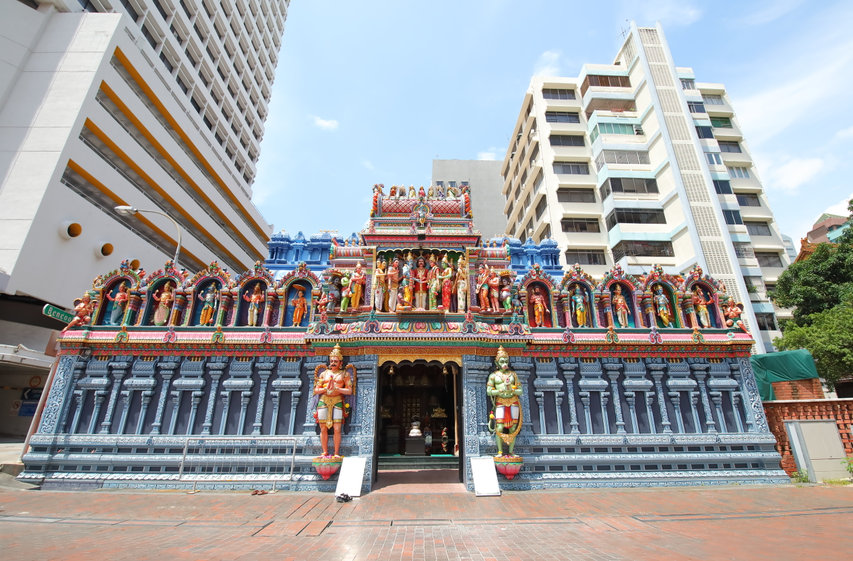 Sri Krishnan Temple is a religious place of worship dedicated exclusively to Sri Krishna, the eighth avatar of Shiva, and Rukmini, his consort. This Hindu temple can be found at Waterloo Street in the southern district of Singapore. It is constructed with a typical South Indian Hindu temple design and is decorated with statues including Vishnu’s 10 incarnations, his mount Garuda, and a wedding scene.

In 1870, Hanuman Beem Singh set up a shrine of Krishna under a banyan tree on Waterloo Street for the growing number of Hindu devotees in the surrounding neighbourhood at Bras Basah Road, Albert Street and Victoria Street. His successors built the main shrine and eventually the hall and walls. The temple has undergone extensive renovations costing over SGD4 million.

For many Hindu families in Singapore, the temple offers plenty of festive activities during Deepavali and Krishna Jayanthi celebrations. The chief priest would lead prayers to a mass crowd on Deepavali. It begins with a chime of bells, followed by music played by Hindu temple musicians. Devotees may request to have their names read out by the priest during communal prayers. In addition, the priest will bless them with white ashes on their forehead.

The Sri Krishnan temple is also located right next to Im Thong Hood Cho Temple and many Chinese devotees cross over to pray in the Hindu temple. 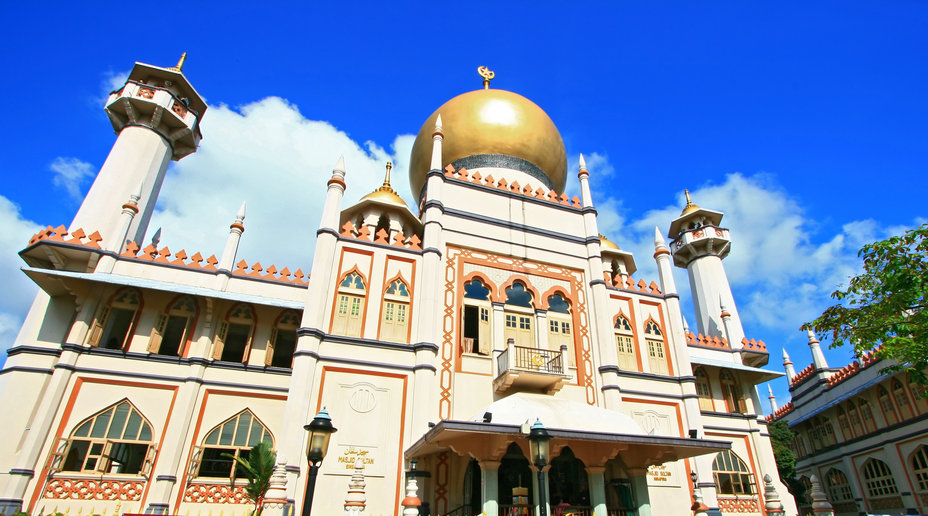 Located between North Bridge Road and Muscat Street in the Kampong Glam precinct, Masjid Sultan (Sultan Mosque) is a mosque dedicated to Muslims. With its giant prayer hall and beautiful golden domes, the Masjid Sultan is a must-see for both locals and tourists.

The mosque was first constructed in 1824 for the first Sultan (King) of Singapore, Sultan Hussein Shah. After a hundred years, the mosque was worn down and needed repair. In 1932, it was rebuilt and redesigned into the beautiful domed-shaped architecture you see today by Denis Santry from the architectural firm Swan and Maclaren.

During festive occasions like Hari Raya Aidilfitri and Hari Raya Puasa, Muslims would don their new baju kurung and congregate in the prayer halls to remember their faith through reflection and prayers. Masjid Sultan also organises weekly programmes for Muslims to take part in. 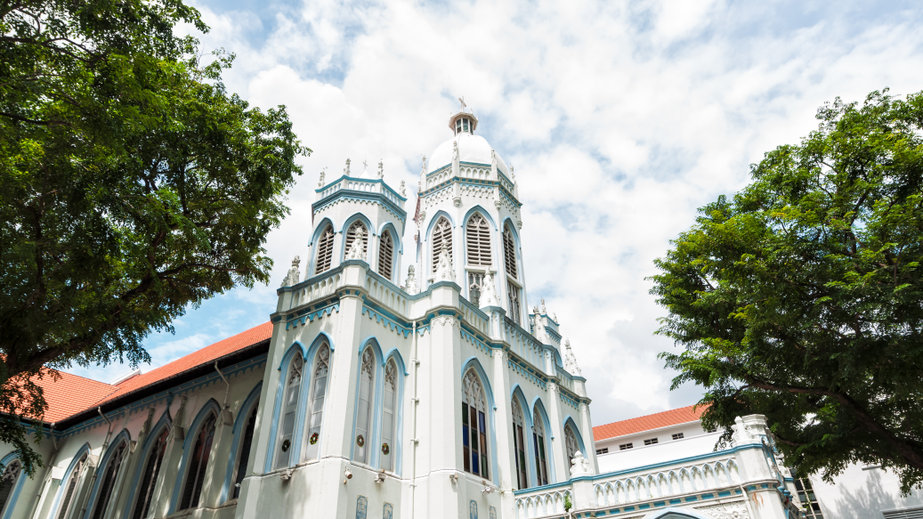 The St. Joseph’s Church caters to Roman Catholics in Singapore and is located along Victoria Street.

Its history can be directly linked to the Portuguese Mission. Father Francisco da Silva Pinto e Maia migrated from Macau in 1825 and secured 12 lots of land for the church between Middle Road, Queens Street, and Victoria Street. Unfortunately, Father Maia passed before he could build the church. He left behind his property and funds, and his successor, Father Vincente de Santa Catarina, undertook this project.

The church’s architectural design was purposefully designed in a Gothic Revival style to fit the religious ideals of Saint John de Brito, Saint Joseph, and Saint John. There are four columns, which support the portico and giant marble statues of the three religious figures. It was constructed to accommodate 1,500 worshippers.

By 2005, the National Heritage Board of Singapore recognised the St. Joseph’s Church as a national monument because of its cultural and social importance to Catholics, especially in the Eurasian community.

St. Joseph is known for its Portuguese-inspired traditions including its weekly Traditional Latin mass. On Good Friday, there is no mass at St. Joseph in line with the Portuguese tradition. Instead, a liturgy is performed. Altars are left bare, church bells are silent, and penance baptism and anointing of the sick are conducted.

Whether you’re a local or a tourist, visiting places of worship is a great way to understand religious traditions which have been a big part of Singapore’s history and influenced many of its people.

For visitors looking for comfortable and affordable accommodation nearby, Heritage Collection on Seah and Heritage Apartments City Hall are a stone’s throw away from these places of worship. Learn more and book your reservation here!